An Introduction to Cisco ASA Firewall :-

The Cisco Adaptive Security Appliance (ASA) is a versatile device that is used to secure a network. To preserve the integrity and stability of resources on a network, they must be protected from things that can’t always be trusted or controlled. The firewall must inspect traffic at Layer 4 so that any new sessions that are negotiated as part of an existing connection can be validated and tracked.

The Cisco ASA platform has the capability to perform any of the firewall techniques described in the An Introduction to Network Firewalls Technologies. Even further, the ASA has many features that go beyond the basic firewall techniques, giving it great versatility.

previously i written about Cisco Router, Watchguard Firewall. from today i am going to write about Cisco ASA features and many-many topics on cisco ASA. You can also check my cisco ASA articles on ccnpsecurity.blogspot.com . 🙂

In this article, i am going to show you Cisco ASA features. 🙂

The SPF engine tracks connections and their states, performing TCP normalization and conformity checks, as well as dynamic session negotiation.

Here is some of the information that a stateful firewall keeps in its state table:-

Note :- The security appliances provide a stateful process for TCP and UDP traffic only, by default. Starting in version 7, ICMP can also be treated statefully, but this is disabled by default.

The  security  appliances  include  a  security  feature  called Sequence  Number  Randomization(SNR), which is implemented by the security algorithm. SNR is used to protect you against reconnaissance and TCP session hijacking attacks by hackers. One problem with the TCP protocol is that most TCP/IP protocol stacks use a fairly predictable method  when  using  sequence  numbers—a  sequence  number  in  a  TCP  segment  indicates  the  number of bytes sent. With many connection types, a hacker can use this information to  make predictions concerning the next set of data to be sent, and thus the correct sequence  number. Sophisticated hackers will then use this information to hijack the session.

The  security  appliance’s  SNR  feature  addresses  this  problem  by  randomizing  the TCP sequence numbers that the TCP/IP application places in the TCP segment header. The security appliance will place the old sequence number as well as the new sequence number in its conn table. As traffic is returned from the destination, through the appliance, back to the source, the appliance looks for this information and changes it back for acknowledgment purposes. 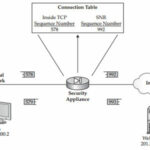 A TCP segment might pass through the security appliance where the  sequence number is 578 in the segment, as shown in above Figure. The SNR changes this  sequence number to a random number and places it in the state table (992 in this case), and forwards the segment to the destination. The destination is unaware of this change and acknowledges to the source the receipt of the segment, using an acknowledgment number of  993.  The  appliance,  upon  receiving  the  reply,  undoes the  SNR  process  by  changing the 993 value to 579, so that the source device is not confused. Remember that  the TCP acknowledgement process has the destination increase the sequence number by one and uses this as the acknowledgment number.

How to Find all domains on same IP address

With threat detection, the appliance monitors the rate of dropped packets and security events, which can be caused by matches on ACL deny statements, receiving invalid  packets, exceeding connection limits (total connections and TCP connections that don’t  complete the initial three-way handshake), detecting denial of service attacks, receiving  suspicious ICMP packets, overloading interfaces, detecting a reconnaissance scan, and  many other factors. When a threat is detected, a log message is generated.

Cisco supports a TCP Intercept feature that allows you to place limits on the number of complete and/or half-open connections. A half-open connection is one that has not completed the initial three-way handshake: SYN, SYN/ACK, and ACK. This feature can be used to defeat or greatly limit the effect of a TCP SYN flood attack.

How to View SYN-Flood attack using the Command Prompt

How to Prevent Dos attacks with WatchGuard XTM Firewall

Application inspection and control:- The AIC function analyzes application layer protocols to track their state and to make sure they conform to protocol standards.

User-based access control:- The ASA can perform inline user authentication followed by Cut-through Proxy, which controls the access that specific users are allowed to have. Once a user is authenticated, Cut-through Proxy also accelerates inspection of a user’s traffic flows.

The user connections are not typically authenticated by the appliance itself, but by an  external  security  server,  such  as  the  Cisco  Secure Access  Control  Server  (CSACS).

Cisco supports both the TACACS+ and RADIUS protocols for authentication. The CTP feature on an appliance can authenticate the following connection types:-

Session auditing:- Accounting records can be generated for user-based sessions, as well as for application layer connections and sessions.

Denial-of-service prevention:- An ASA can leverage traffic-control features like protocolnormalization,trafficpolicing,andconnectionratecontrolstominimize the effects of denial-of-service(DoS)attacks.

Traffic correlation:- The threat detection feature examines and correlates traffic from many different connections and sessions to detect and block anomalies stemming from network attacks and reconnaissance activity.

High availability failover clustering:- Two identical ASA devices can be configured to operate as a failover pair, making the ASA security functions redundant in case of a hardware failure.

Redundant interfaces:- To increase availability within a single ASA, interface scan be configured as redundant pairs so that one is always active, while the other takes over after an interface hardware failure.

Ether Channel:- Multiple ASA interfaces can be aggregated or bundled together as a single logical interface. By connecting an Ether Channel between an ASA and a switch, you can scale the bandwidth and offer additional redundancy.

Traffic and policy virtualization :- An ASA can be configured to operate multiple virtual instances or security contexts, each acting as an independent firewall. Each virtual context has its own set of logical interfaces, security policies, and administrative control.

Rich IP routing functionality :- An ASA can forward traffic onto the local networks connected to each of its interfaces without any additional IP routing information. It can also be configured to use static routes or a dynamic routing protocol such as RIPv1, RIPv2, EIGRP, and OSPF to make more complex routing decisions.

Powerful Network Address Translation (NAT) :- As an ASA inspects and forwards packets, it can apply a rich set of NAT functions to alter source and destination addresses.

Transparent (bridged) operation :- An ASA can be configured to operate as a transparent firewall, effectively becoming a secure bridge between its interfaces. Transparent firewall mode allows an ASA to be wedged into an existing network without requiring any readdressing of the network.

Integrated DHCP, DDNS, and PPPoE:- An ASA can be configured to act as a DHCP client or a PPP over Ethernet (PPPoE) client to obtain a dynamic IP address for its interfaces from the network, and as a Dynamic DNS (DDNS) client to record information for hostname-to-address resolution. As well, an ASA can act as a DHCP server to offer IP addressing services to other hosts on the network.

IPv6 support:- An ASA can be configured to operate natively in an IPv6 network.

Simple software management :- An ASA supports a local file system and remote file transfers for software upgrades. Software upgrades can be performed manually, automatically, or in a zero-downtime fashion on a failover cluster of ASAs. 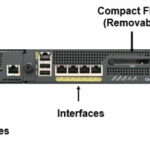 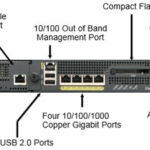 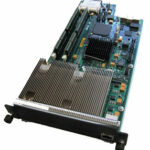 An Introduction to Routers