Here are the  four default security policy rules for traffic as it flows through the appliance:- 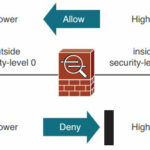 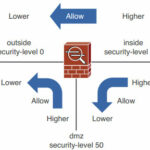 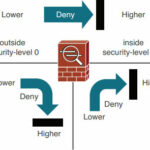 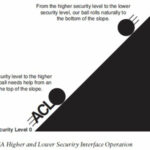 As you seen in the above image, if you need to comes from top to bottom, you have no need of any help. but in the case of lower to higer, you need a third party help. Same rule is going to be apply here. 🙂

For example, a user from the Internet who is trying to access an FTP server on the  inside of your network is by default denied the connection. You could use a couple of  methods to open a small hole in the firewall to allow this connection.

If only a handful of outside users need access to the FTP server, CTP is an excellent  method to use. However, if this is a public FTP server where people from the Internet are constantly accessing files in the server, and these people could be anyone in the world,  CTP doesn’t provide a scalable solution.

Instead, you can use an ACL to open a temporary hole in the security algorithm to  allow FTP traffic to the specific FTP server inside your network. In this sense, you are creating an exceptionto the appliance’s default security policy, which is to deny all inbound  traffic by default.

You can assign a security level of 0 to 100 to an ASA interface with the  fo l lo w i n g  i n t erface configuration command :-

From ASDM, you can set the security level when you edit an existing interface or add a new one.

In addition, there are two cases in which it is not possible to assign unique security levels to each ASA interface :- 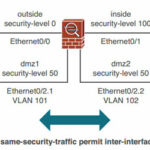 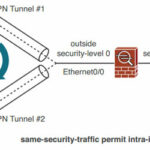 If an ASA is configured for VPN connections, you can use the following command in global configuration mode to relax the security level constraint within an interface.

It’s too important to understand the Security level concept in Cisco ASA . i tried to define the all the process.

An Introduction to Cisco ASA Firewall

An Introduction to Routers