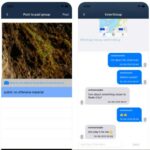 Edward Snowden’s revelations about mass NSA surveillance, combined with the fact that the UK government is now requiring ISP’s to record all internet traffic with the infamous snooper’s charter and the Facebook’s Cambridge Analytica leak-scandal has made privacy a very precious commodity. The ability to monitor your traffic means messages you send with many popular apps can be intercepted and read. In some cases, people can even impersonate you or your friends online. There are messaging apps, however, which buck this trend. What does it mean for messaging to be secure? Usually, it means that your messages are encrypted before they leave your device. Encrypted messages can’t be read by anyone other than the intended recipient, even if they’re intercepted during the exchange.

Some encrypt your messages before they leave your device, so if they are intercepted, they’ll be meaningless.

InnerGroup prides itself for not collecting or storing any of its users’ personal info and not owning the messages and media they send via the app, which is quite remarkable for a free messaging app. Creating a chat group only cost a small fee, that when you consider all the benefits and privacy this app offers seems insignificant. The app comes with simple, sleek and very intuitive user design, making it pretty easy and straightforward to use. There are no boring ads – what so ever – and the app claims there will never be. InnerGroup does not participate in any kind of data collecting and once the message reaches all the members of the group chat, they are permanently deleted from the InnerGroup server.

Creating a group is extremely simple. The group creator/owner can invite people to join in the group, or people can send a request which must be approved by the owner if they’d like to become a group member. All the messages sent in the group can only be viewed by the Groupies (the group members). If the owner of the group decides to delete the group, all the conversations are deleted from all the Groupies devices. The group owners will always know if someone took a screenshot of the conversations within the group as they will be instantly notified. InnerGroup offers more security than the majority of messaging apps on the market and you would not be wasting your time if you decide to try it out.

The InnerGroup app is available for Android and iPhone devices and Mac computers, so you can find it for download at the Google Play Store, the App Store and the Mac Store.