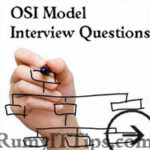 If you are looking for a network Engineer , Network Administrator or any other IT administrator job. OSI model is one the most common topic for interviewer to ask you. Today i am going to cover-up most of the interview questions related to OSI model.

Ans :- Check my article What is Transmission Control Protocol (TCP )

(Q) What is differences between TCP and UDP ?

Ans :- Check my article What is differences between TCP and UDP

(Q) Which layer is responsible for converting data packets from the Data Link layer into electrical signals ?

Explanation :- The Physical layer takes frames from the Data Link Layer and encodes the 1s and 0s into a digital signal for transmission on the network medium.

(Q) At which layer is routing implemented, enabling connections and path selection between two end systems. ?

Explanation :- The Network layer provides routing through an inter-network and logical addressing.

(Q) Which layer defines how data is formatted, presented, encoded,and converted for use on the network ?

Explanation :- The Presentation layer makes sure that data is in readable format for the application layer.

(Q) Which layer is responsible for creating, managing and terminating sessions between applications ?

(Q) Which layer provides logical addressing that routers will use for path determination ?

Explanation :- The Physical layer is responsible for the electrical and mechanical connections between devices.

Explanation :- The Data-link layer is responsible for the framing of data packets.

(Q) Which layer is responsible for keeping the data from different applications separate on the network ?

(Q) Which layer segments and resembles data into a data stream ?

(Q) Which layer provides the physical transmission of the data and handless error notification, network topology, and flow control ?

(Q) Which Layer manages device addressing, tracks the location of devices on the network, and determine the best way to move data ?

(Q) How Data breaks down on each layer from top to bottom ? 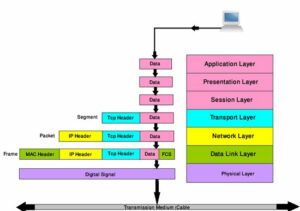 Ans :- Data encapsulation is the process that takes place when one host on a network needs to send data to another host. As data is prepared for transit, it flows down through each layer of the OSI model. At each layer, extra control information is added to the data before being passed to the layer below. This process continues until the data reaches the physical layer where the data is passed onto the network medium as a series of 0’s and 1’s. 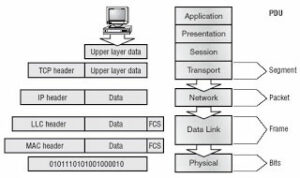 (Q) DNS uses which protocol? Why?

DNS is using both TCP and UDP protocol. TCP for Zone excahnges between server and UDP when a clients is trying to resolve a hostname to an IP-address.

(Q) What are the differences between OSI and TCP/IP model? 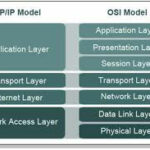 (Q) MAC address works on which layer ? What are the differences of MAC sublayer and LLC sublayer?

MAC sublayer(802.3):- defines how to transmit data on physical layer

You must have knowledge of each layer to give the most of answers.

i am writing this article after collection interview questions from my friends or my own interview experience. If you have any question regarding OSI model. please pass the comment. so i will add it.

Also Check :- How to start your career as IT professional

4 Reasons to buy iPhone From Costco