Business cards are one of the icons of the business world.

A great way to creating a ‘sign off’ statement, they have become a staple in the pockets of anyone engaged in commerce, from the average trader to the CEOs of large companies.

Traditionally made from paper and sometimes plastic, the cards have been very helpful in letting one know about the details about one’s business, contact information and so on. 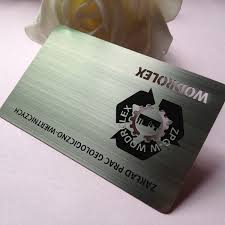 Increasingly, a new medium entered the forum, which was that of metal. It was something very unusual in the world of business, and in many ways still is, which is why they maintain a high degree of aura around them.

When it comes to metal business cards, there are several advantages to using them.

Ten of the most prominent ones are given in the points below.

If there is one advantage to using metal cards, it is that they are long lasting.

One could say that it is one of the main reasons why metal cards are preferred, by many people.

It is a known fact that the industry standard, visiting cards made from paper or sometimes even plastic, do not last very long. They tend to deteriorate within a very short period of time, especially when exposed to the elements such as water and heat.

This however, is not much of a problem when it comes to metal cards. Even the issue of corrosion can be dealt with, if one uses the right alloys, paints and enamels.

This point is in many ways related to the previous one.

It has nothing to do with the card per se, but rather the information printed on it.

Traditionally, cards have always been presented information with the help of paints and pigments. These, while being great in the short run, tend to fall short of expectations in the long run. The prints used on paper may begin to fade with the passage of time.

In the case of metal cards however, the same isn’t really a problem. This is especially the case if the information is etched, either using a physical engraving tools or laser technology, both of which are proven to be long lasting.

It is not always that people come across metal cards in their lives.

With paper and plastic being the industry standard, people have come to expect it to be the way things work in the world of visiting cards.

This notion of what a card ought to be will get nullified, when one comes across a metal card, and leave the individual feeling a sense of ‘novelty’ about it all.

All of this can contribute to a good first impression, if one were to use the cards in the right manner.

This is an extension of the previous point.

Although metal cards have been around for a very long time, they are still rather rare, typically due to the lack of awareness or issues with the price factor.

All of this can create a ‘unique’ feel for the individual or business being represented on the card, compared to what would have been the case with traditional cards.

In the world of business, ‘positioning’ can be understood as creating a certain ‘aura’ of value about an individual or company.

For example, companies that sell luxury goods have created a business position that indicates that the products they sell have a high value. This ‘creation’ of value of a certain product or service, can be understood as ‘business positioning’.

A metal card can be one of the simplest and the most ideal forms of business positioning, as it can act as and a way to indicate a certain sense of ‘value’ in the minds of prospective customers. After all, it’s not every day that one comes across metallic cards.

A conversion in business can be defined as a situation when a prospective buyer becomes a confirmed buyer.

It is a situation where a sale is said to have taken place, or in other words, when a consumer has been ‘converted’ to a customer.

It is at the end of the day, the goal of every business, and something which determines whether a business stays afloat or goes down under.

While a metal card doesn’t do much per se, it does act as a way to symbolize the value of a company, and thereby attract potential clients to consider dealing with its products or services at greater numbers than otherwise. It is a simple numbers game which pays off in the end.

Visiting cards are something of a trinket unto themselves.

Given the rarity of them on a general basis, they tend to catch people’s attention, as well as make for something of a conversation starter.

These things make metal visiting cards an ideal choice if one is interested in using the grapevine to get one’s business heard about far and wide.

If there is one major limitation of traditional cards, it is with their designs.

Due to their lack of strength, they are unsuitable for designs beyond the basic squares and rectangles. This is however not the case, when it comes to metallic ones.

Given that metal has a high degree of strength, it can be crafted into a variety of shapes and sizes, giving a greater degree of freedom in which to express the details of oneself or one’s business.

The fact that the cards are made from metal need not limit them to the color of their base metals.

On the contrary, the fact is that it is very much possible to have the cards come in a variety of colors.

These aren’t painted in their entirety, but rather in combination, where a part of the card’s surface retains their original coloration, while the rest is painted over.

This allows for the cards to have a variety of different designs and more, allowing for the same degree of style and variability like those made from paper or plastic.

It is often thought that metal cards are expensive.

While there is certainly some degree of truth to this, it is not always the case.

It is certainly true that paper and plastic cards are cheaper in comparison to metallic ones. At the same time however, it doesn’t mean that metallic ones can’t be affordable.

When purchased in large numbers, the principle of ‘scale’ helps to reduce the ‘per unit’ cost, making it something that is affordable for the many businessmen.

In all, it can be said that metallic cards make for a very unique and interesting way to introduce oneself or one’s business in one’s career.

While they are still rare and often unknown to many people, the fact is that they remain an elusive and indeed unique way to present oneself, and reap all the benefits that they offer later on.