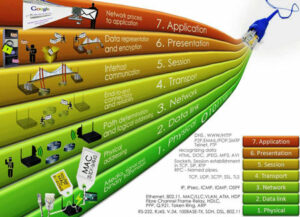 When networks first came into being, computers could typically communicate only with computers from the same manufacturer. For example, companies ran either a complete DECnet solution or an IBM solution — not both together. In the late 1970’s, the Open System interconnection (OSI) reference model was created by the International Standard of Organization (ISO) to break this barrier.

The ultimate aim of the OSI reference model is to break down the task of data communication into easily manageable steps.

” A reference model is a conceptual blueprint of how communications should take place. it addresses all the processes required for effective communication and divides these processes into logical grouping called layers. ”

The seven Layers of the OSI Model :-

The purpose of each layer in the OSI reference model is to provide service to the next layer above it while shielding the upper layer from the complications of the layer below it. The higher layers do not need to know how the data came there or what kinds of technologies were used at the lower layers.

Application Layers :- The Application layer of the OSI model marks the spot where users actually communicate to the computer. The purpose of this layer is to manage communication between the applications and end-user processes.

This is the layer through which applications receive and request data. 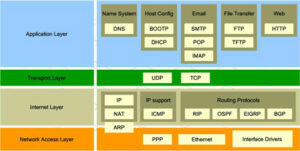 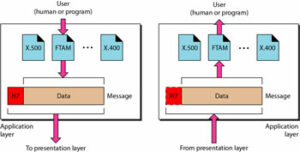 The Primary function of this layer is to define data formats such as text , ASCII text , Binary and Jpeg.

The session layer is responsible for settings up, managing, and then tearing down sessions between Presentation layer entities. This layer also provides dialog control between devices, or nodes.

The Session layer define how to start/establish a connection, how to use and control a connection and how to break down the connection when a session is complete.

Your web browser (an application layer object) opens a web page. That page contains text, graphics, Macromedia Flash objects and perhaps a Java applet. The graphics, the Flash object and the Java applet are all stored as separate files on the web server. To access them, a separate download must be started. Your web browser opens a separate session to the web server to download each of the individual files. The session layer keeps track of which packets and data belong to which file and keeps track of where they go (in this case, to your web browser).

Protocol Used on the Transport Layer :-

The network layer ( also called layer 3 ) manages device addressing, tracks the location of devices on the network, and determines the best way to move data, which means that the network layer must transport traffic between devices that aren’t locally attached. Routers ( layer 3 devices ) are specified at the network layer and provide the routing services within an inter-network.

In addition, the Network layer defines how to fragment a packet into smaller packets so that it can be accommodated in the transmission media with smaller MTU (maximum transmission unit) sizes.

The Data Link layer provides the physical transmission of the data and handles error notifications, network topology, and flow control. This means that the Data Link Layer will ensure that messages are delivered to the proper device on a LAN using hardware addresses and will translate the messages from the Network layer into bits for the Physical layer to transmit.

The Data link layer formats the message into pieces, each called a data frame, and adds a customized header containing the hardware destination and source address.

The Data-Link Layer is composed of two sub-layers :- 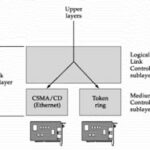 The physical layer is special compared to the other layers of the model, because it is the only one where data is physically moved across the network interface. All of the other layers perform useful functions to create messages to be sent, but they must all be transmitted down the protocol stack to the physical layer, where they are actually sent out over the network.

Hope you Like my post.The OSI Model’s Seven Layers Defined and Functions Explained. Please Share with others.