This potentially fascinating site maps first-hand accounts of World war two. veterans and survivors of the conflict are filmed on smartphones talking about their wartime experiences, and the footage is then uploaded and -after review -posted on the relevent location on a world map. Visitors can click the marker to watch the clip. 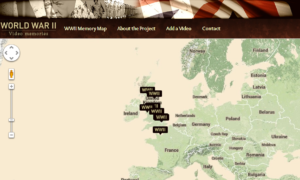 “The experiences of some senior military personnel were recorded and shown to great effect in documentaries such as The World At War, but these represent only a fraction of the story. With every week which passes, the wartime generation grows smaller, and its unique memories correspondingly disappear. As someone who has served in a war and now works in a sector which cares for older generations, and therefore regularly hears residents stories on the extraordinary period between 1939 and 1945, I was inspired to create a site that allowed for these memories to be easily recorded for posterity. Whether the memories recount the horror of conflict or the realities of life on the Home Front, I hope that people from across the world will grab their smart-phones and take the opportunity to film and document the memories of the World War Two generation…ensuring that their experiences are understood and never forgotten.”

Just click a location pin on this superb map to see a photograph taken at the spot during World War-1.