Azur Lane is an Action RPG developed by Yostar. The game revolves around Naval Warfare and is a unique mix of an RPG, 2D shooter and is combined with tactical genres with a robust and beautifully designed premise. The main concept of the game is the fact that it is a 2D side scroller. 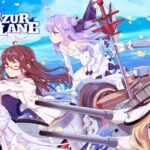 The game lets you organize your ships into six different fleets to break through the enemy’s defenses and ultimately defeat them. The game puts a lot of focus into positioning in both offensive and defensive situations. To make the most out of your ships, you will be spending a lot of time trying to make sure all the synergies between your warships lineup and that your fleet deals the maximum amount of damage possible.

The game features a variety of over 300 ships based and inspired on different warships worldwide. A beautifully drawn character represents each ship. The game features both AI and manually controlled battles.

Since it is a Gacha game, you’ll also be drawn into the addictive card collecting aspect of the game with tons of different loot boxes and summons available. Surprisingly, you can still complete the game and get to a decent level even as a F2P new player if you play your cards right. Azur Lane has tons of content and different missions for you to keep coming back to the game. The art is extremely well-crafted, and for someone new to the RPG / auto-battle genre, the game is an excellent place to start from.

LDPlayer is specially designed for games like Azur lane on PC, PUBG Mobile, Free Fire, Call of Duty, Mobile Legends, etc. LDPlayer is also the first-ever android emulator to run PUBG Mobile within the week of its launch. The below are some of the many amazing features available in the LDPlayer emulator.

The aforementioned features are just the tip of the iceberg; there are many other features that cannot be described in words. Check out all those features and download Azur Lane on PC to enjoy the next-level battles.

Downloading Azur Lane on PC is quite a simple process, which is explained in the following steps:

You can also use LDPlayer’s built-in APK Installer (if you have an APK file of Azur Lane) to install the PC game.

Playing Azur Lane or any other mobile games on the LDPlayer android emulator will give you an edge over other players. For example, the smart keymapping features allow you ease of use, and a bigger screen gives you a whole screen to watch your allies and enemies from far away.

Playing games like Free Fire, Eve Echoes, and Dead by Daylight on an android emulator provides you a whole new mobile gaming experience on PC. Download Azur Lane on PC now and enjoy unlimited features to enhance your gameplay with better graphics and the best FPS.