Looking for a new smartphone is an overwhelming task. There are plenty of options available, each claiming to be an exceptional choice. In this post, however, we will focus on two models – Google Pixel vs iPhone 6s. From the display to the operating system to the overall user experience, they differ in more ways than one. If you are clueless about which one to buy, read the rest of this brief post and learn from the insights we’ll be sharing. 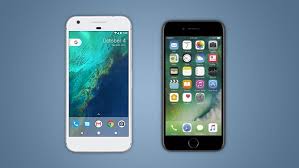 When you are buying a new phone, the first thing that you will notice is the aesthetics. Truth be told, a lot of people decide on the basis of design.

At first look, the two are almost identical in terms of design. One thing that makes them different is iPhone 6S comes with a round physical home button, which is noticeably lacking in Google Pixel. Both have evident bezels, far from the newer smartphone models with bezel-less design.

In terms of weight, the two models are both 143 grams.

For the build material, Apple iPhone 6 comes with an aluminum back while the rear part of Google Pixel is made of metal.

We are obsessed with taking pictures, so the camera is one of the most important features to look at. The camera of Apple 6s has 12 megapixels. The selfie camera is 5 megapixels. For the video, it can take up to [email protected] It also comes with dual LED flash.

On the other hand, the camera of Google Pixel is 12.6 megapixels. Meanwhile, its selfie camera is 8 megapixels. It can take videos at [email protected] Like its counterpart from Apple, There are newer iterations of the phone with improved camera, which is one of the reasons why Google Pixel is the fastest growing smartphone in the United States.

It can be frustrating for your smartphone to run out of battery when you need it the most. With this, it is also important that you choose one that comes with a powerful battery. iPhone 6s comes with a 1,715 mAh battery, which is significantly smaller compared to the capacity of Google Pixel’s battery, which is 2,770 mAh.

To understand the performance of the two phones, it is crucial that we look at its technical details and features. When it was first released, according to TechRadar, it is well-loved because of its fluid performance, although, this is nothing compared to the improvements that we can see in the new generations of iPhone. It is powered by iOS 9, which you can upgrade up to iOS 12.3. It has an Apple A9 chip. Lastly, it comes with a dual-core 1.84 GHz Twister CPU.

The performance of Google Pixel is equally impressive. The operating system is Android Nougat by default, but you can update up to Android Pie. The chipset is Qualcomm MSM8996 Snapdragon 821, which is also 14 nanometers, similar to the size of the chip that you will find in Apple 6s.

The display refers to the screen of the smartphone, which has a direct impact on overall user experience. Apple iPhone 6s has IPS capacitive touchscreen LCD with 16 million colors. It has a resolution of 750 x 1334 pixels and 16:9 ratio. The size, on the other hand, is 4.7 inches.

Meanwhile, in the case of Google Pixel, it has AMOLED capacitive touchscreen, which also has 16 million colors. The size is 5 inches. As for the resolution, it has 1080 x 1920 pixels, which is way better than what you will find in iPhone 6s.

For those who like to take a lot of pictures and videos or download applications, including games, the memory is another important consideration when choosing a smartphone. Both the Google Pixel and iPhone 6s have no external memory, which means that you cannot insert a memory card. Apple iPhone 6 has more variants in terms of memory as it is available in 16, 32, 64, and 128 GB. The RAM, on the other hand, is 2GB. Meanwhile, Google Pixel is available only in two variants of memory, 32 and 128 GB. However, it is better than Apple iPhone 6s in terms of RAM as it has 4GB.

To round off our comparison of the two phones, let us also look at the special features that they have. Both of the models have fingerprint sensors. Apple iPhone 6s has a front-mounted fingerprint sensor, which is located in the home button. The fingerprint sensor in Google Pixel, on the other hand, is mounted at the back. Both models also have light and proximity sensors, as well as gyroscope, compass, accelerometer, and barometer. The two phones also have loudspeaker and a 3.5 mm audio jack.

Now that we have reached the end of this Google Pixel vs iPhone 6s comparison, it is time to make a decision. In our opinion, Google Pixel stands out. While Apple might have the lion’s share of the market, technically speaking, it is Google Pixel that takes home the crown. Performance, battery, and display are just some of its many advantages that can compel you to choose Pixel over iPhone. At the end of the day, we all have our personal preferences on which one is better regardless of the specs of the phone.